Don’t Be a Dead Hero

You are standing at the top of an open manhole acting as an attendant for a team of maintenance personnel who have entered a confined space that required an entry permit. It has been several minutes since you talked to the crew, but you can peer down into the space and see them. During your last few checks with them, everything was A-OK.

This time, however, when you yell down to check on them, you don’t get a response. You look inside the hole and you notice that they are slumped over or leaning up against the wall like they are taking a nap.

You yell for help but know that it will be some time before a rescue team arrives. Those are your friends down there, and they need your help. They are real close to the top, why you almost could just reach down and pull them up. Your pulse is beating and you are breathing hard from excitement. You’re yelling at the workers, trying to arouse them. Something has to be done . . . so . . . you jump down into the hole.

The rescue team arrives in time to pull your lifeless body out with the rest. The record will show that you attempted to rescue your friends and gave your life doing so. Some would say you were a hero. Yes, but a dead one!

The moral of this scenario is that when you are an attendant watching over a confined space, your duty is to observe and assist from above. If you have a tagline on the person inside and can pull them out without entry, go ahead (but how much dead weight can you lift from below your feet). If you have the proper rescue tripod, you can winch the victim to the surface. At no time do you enter the space to attempt rescue. You can wait until a new attendant arrives, and after you put on the proper rescue equipment and enter (providing, of course, you have been trained in rescue procedures). But you must never...never...never abandon your duties as the attendant and attempt a rescue on your own. 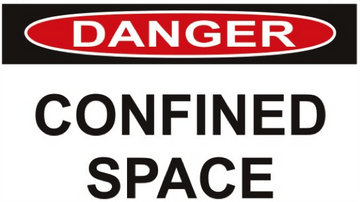 You have no idea what the hazards are that overcame your co-workers. And like the scenario described above, you might wind up as a DEAD HERO.

Confined spaces can be killers. Know what the risks are and take appropriate measures to control them. Be sure that air samples are taken before entry, and as frequently as required by the activities being conducted. Provide ventilation into the space if required. Use all personal protective equipment in accordance with the manufacturer directions. Use your entry permit to log the sample results and the time of the test. Have a rescue plan established before it is needed.

We want you to walk away from all confined space entry situations. We don’t want to carry you away in a body bag. Think SAFETY and stay ALIVE.

► Back to Unique Scaffold News